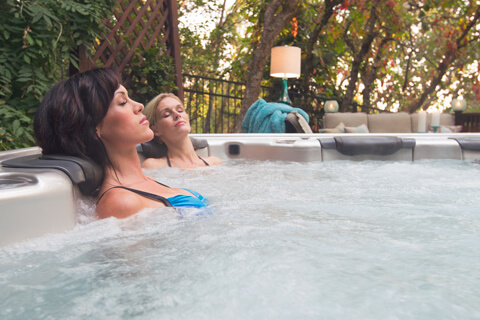 If you already own a hot tub or you’re familiar with maintaining one, you’re probably familiar with traditional chlorination to keep the spa water clean and bacteria-free. This method works well, and it’s been keeping spas fresh and inviting for decades.

But, traditional chlorination has its drawbacks as well:

So, while a traditional hot tub chlorine system is both effective and reliable, there are solutions available that can reduce the time you spend on hot tub maintenance and the prevalence of negative side effects.

One of the most popular options is a salt water spa maintenance system.

How a salt water spa works

Basically, a salt water spa system accomplishes the same purpose as traditional chlorination, but it achieves those goals through a different means.

Rather than adding chlorine, which then becomes hypochlorous acid as it reacts to the hydrogen and oxygen in the water, the salt water system uses salt as the basis of the chemical reaction. Then, through a process called electrolysis, the dissolved salt is transformed into free chlorine. This process produces several beneficial side effects:

One such solution is the FreshWater Salt System from Hot Springs Spa.

Spotlight on the FreshWater Salt System

Available on all Highlife® Collection and Limelight® Collection spas, the FreshWater Salt System from HotSpring Spa is an affordable, simple water care system that eliminates the worry of keeping spa water clean without requiring a drain and refill for a full 12 months.

There is nothing else on the market that’s as easy to use as the FreshWater Salt System.

The low-cost titanium cartridge works with salt to generate chlorine as a sanitizer while keeping water feeling soft and natural. The unparalleled patent-pending design makes water care simple for spa owners to use and enjoy.

Here are 3 key reasons to consider the FreshWater Salt System:

Watson’s sells the spas that can use the FreshWater Salt System, a salt system spa chemical starter pack, and replacement cartridges, all at the lowest price in the U.S., guaranteed.

Have questions or  want a personalized quote? Contact your local store now. Or, click below to shop online.