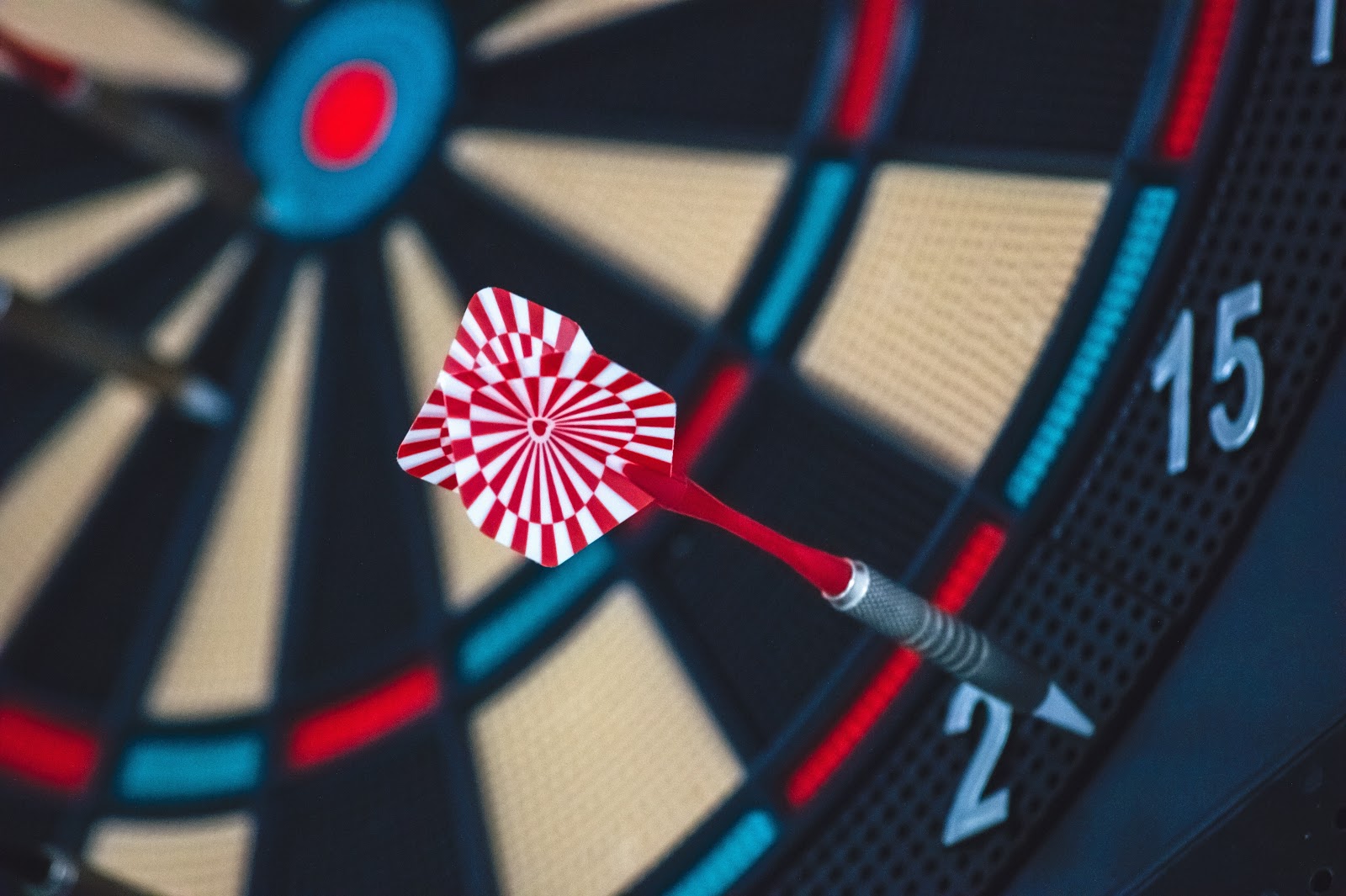 Basketball, ‘01 game, cricket, legs, killer, Round the World: There are countless games you can play with a simple dartboard.

Each comes with its own set of rules of how to play the game and how to score.

Watson’s carries one of the largest Games & Rec selections in the nation, including dartboards, and is here to help. Shop Games & Rec now.

The basics of dart scores

As a general rule of thumb: Darts are scored by checking where exactly the dart hit on the dartboard.

The dartboard is divided into 20 sections, which are each numbered 1 through 20. Metallic wires or circular spiders divide these sections into smaller subsections -- single, double or triple.

If your dart hits the single area? You get the exact number of the section or segment you landed in.

If your dart lands in the thin ring along the outer edge? You score double the points of whatever section the dart landed on. This is known as the “double ring.”

If you hit the thin ring in the mid-section of the dartboard? You score triple the points. (This is usually green or red, but you still receive triple points no matter what the color is.)

The bull’s eye is the centermost section on the dartboard. It comes in varying colors, depending on the board, but it consists of a small circle in the center with a ring around it.

The term “Bullseye” is often used interchangeably to reference only the innermost circle or to include both the circle and the ring around it.

However, if a player hits the Bulls’ Eye, it will be scored differently depending on exactly where it lands:

The innermost circle of the dartboard is usually either red or black, and earns you 50 points. This is also known as “bull,” “inner bully,” or “double bull.”

The outer ring of the bull’s eye is worth 25 points. It is also known as the “Single Bull,” “Iris” or the “Outer Bull.”

How to play a standard game of 501 Darts

Each player starts with a score of 501 and takes turns to throw 3 darts each. As you earn points, you deduct them from that score, starting with 501 and working your way toward 0.

During a player’s turn, the maximum amount of points that can possibly be scored is 180. This only happens when each of the three darts land in the triple-20 in three throws.

The goal is to get to exactly 0.

Most games use a standard version of dart scoring where each player must start and finish with a dart that lands in a double scoring section or on the bullseye.

When the dart counts (and doesn’t)

The wires that are found in between the sections are known as spiders, and they will mostly bounce back when the darts hit any of them. This will result in you not being able to earn any points. Hitting the area out of the outermost wire will also not score you any points.

A dart that remains on the board until collected by the player is counted as a point, unless you are using an electronic board. This happens when the dart is not able to withstand the impact of a throw, and instead bounces back and falls down. It can be difficult to tell exactly where the dart hit, so it is not taken as a point. When playing on an electronic board, the darts fall out all the time, so they are counted as points.

A point is also considered if the dart is touching the surface of the board, or is embedded into the playing surface. If the dart hits the dartboard at an angle or on the side while being held by other darts thrown earlier, then it is taken as a point. The dart will score points equal to where the dart point is touching.

Keeping track of the scores

Any basic paper will do to tally the score as players go.

Scoring requires a basic ability to add, subtract, and multiply correctly to record the scores accurately.

After all three throws, the scores are added up and subtracted from the total of the team to produce the continuing score.

There are also free smartphone apps that will help keep score. Search your phone’s app store for options.

Looking for a dartboard to put in your entertainment area? Shop our selection of dartboards at the guaranteed lowest price in the USA.