Have you ever wondered where or when the sofa was invented?

What about the office chair?

Or how about the bookshelf holding all your books and treasures? 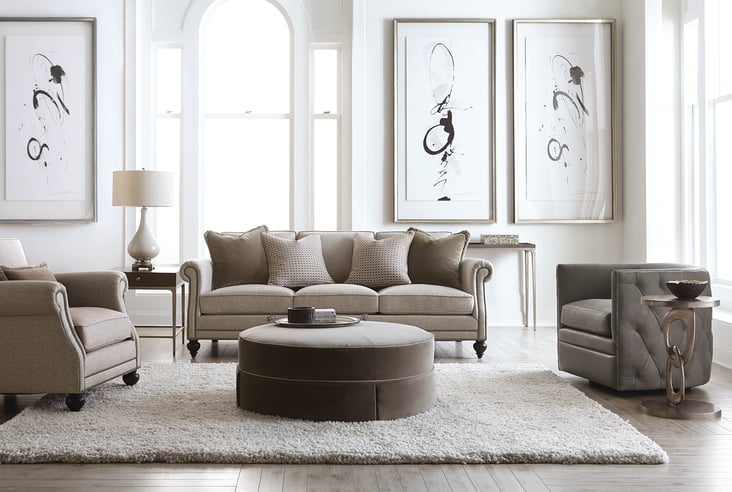 While some furniture, like our beloved motion and theatre seating is relatively new, a lot of furniture has a rich and interesting history as to how and when it came about.

Let’s take a look at some of our more known and beloved pieces!

Depending on your work situation, you may be spending a lot of time in an office chair. But how did this ergonomic, rolling chair come to be?

The first claim of the earliest office chair can be traced back to Julius Caesar. This Roman ruler would conduct his business affairs while sitting upon a curule chair. Making sure business was always attended to, he would even take it with him on his journeys. While this type of chair was used for business, it didn’t look similar to what we expect an office chair to look like.

But eventually, around the 1800s as train travel became popular, a new style of chair, the centripetal chair, was invented by Thomas E. Warren. These chairs were outfitted in train cars to make it easy for individuals to work while in transit.

The evolution of the chair wasn’t complete without our favorite evolutionary theorist, Charles Darwin. He is credited with adding wheels to the office chair for easy movement around the office space and allowing workers to be less fatigued.

Eventually, the office chair become mainstream with its introduction at the Great Exhibition in London in 1851.

It wasn’t until over 100 years later that the office chair got some more beneficial upgrades. In the mid 1970s, manufacturers began incorporating more ergonomic designs to assist with the wellness of said sitters.

Fun Fact: Wingback chairs were created to trap body heat (or heat from a fireplace) and to avoid drafts while sitting to maintain warmer temperatures and comfort.

We spend a lot of time on our sofas, but if you go back to it’s origins, you wouldn’t be so lucky unless you were extremely wealthy.

Dating as far back as 2000BC, sofas were first used in Egypt by pharaohs and the very wealthy. The romans caught on and integrated these “benches” into their living styles. We’re familiar seeing sofas portrayed in films as they relax eating grapes and lounging.

Unfortunately, with the onset of the Dark Ages, the beloved sofas went to the wayside for almost 1,000 years.

European artisans brought back the sofa (with upgrades) in the 16th century, creating very intricate and stunning designs. Although they still lacked comfort with a lack of cushioning or used material like horse hair or hay to stuff with.

It wasn’t until the 1800s that we started to see what we would recognize as a “sofa.” The 1900s, with the industrial revolution and increase in materials and textiles, was when the sofa was truly popularized and became more affordable for the general population.

Now the sofa is available in just about every size, material, and color imaginable. We’ve come a long way from hard benches and horse-hair stuffed cushioning! So next time you take a seat on your sofa, think about how far we’ve come for comfort!

Originally bookshelves didn’t even hold books, but rather scrolls. Oftentimes these early shelving systems looked like a cupboard with open doors.

Even as printing was invented, the use for bookshelves wasn’t in demand as they were rare or expensive so people may only have had a few and no need for storage apart from a trunk or box.

It wouldn’t be until 1666 that history would see the first bookshelves that we would recognize today and in France around the same time, the bookshelf with an upper glass or paneled insert would be created.

Many of these earlier bookshelves were specifically designed and built for libraries, sometimes with very ornate carvings.

In the 18th century, revolving bookcases were created and bookshelves and cases become more popular, especially with the addition of adjustable shelves.

While initially designed for the specific use of storing books, we’ve come to love our modern bookshelves and cases for both books and treasures to display.

Fun Fact: Books in early libraries had their spines to the back of the case, allowing for piercing on the cover for chains and to display ornate clasps.

While tables have existed since ancient times, the specific use for a “dining” table hasn’t had such a long history as the table itself. Most tables were used for writing, games, or other uses.

It wasn’t until the 16th century that a table specifically for dining became popular. And even more interesting, it wasn’t even close to the kitchen as we’re used to today. Oftentimes they were farther away from kitchens, even on different floors or in a different building to avoid kitchen fires.

The Middle Ages is the iconic historical scene we see in movies and books, with long tables outfitting a great hall fit for a king. The tables were portable and able to fit the kingdom’s population. The family would sit above at the main table according to rank. Benches instead of chairs were used for the long table.

As time evolved, there was a desire for more intimate dining, thus smaller dining tables used.

Modern dining tables come in a variety of colors, shapes, and materials and can be used for both formal and informal gatherings.

Fun Fact: Table legs were considered scandalous in the Victorian era and were often covered up so as not to incite men’s imaginations with their shape.

While the materials, colors, textiles, shapes, and patterns have changed immensely over the thousands of year, the purpose and origin of our everyday furniture has not. Watson’s carries one of the largest selections of furniture to fit any budget and decor without compromising on comfort and quality. Contact one of our experts today to learn more about our selections.