The Difference Between a Hot Tub, Spa, Jacuzzi and Swim Spa 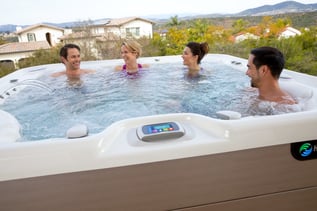 The words hot tub, spa and Jacuzzi tend to be used interchangeably — but are they?

We at Watson’s have been in business for more than 50 years. We carry one of the nation’s largest selections of hot tubs or spas.

When you sink into a hot water tub to relax and soak, we call that a “spa” — in part because we love the story behind the word “spa.”

The word “spa” can be traced back to the 1300s and a Belgian town called Spa.

That's when a curative, thermal spring was discovered in the town of Spa.

The town and its water became famous for what people believed were the water’s special healing and health properties.

More than 700 years later, Spa is now home to about 10,000 people. It’s one of Belgium’s most popular tourist destinations and is world-renowned for its natural mineral springs.

So what about hot tub vs. jacuzzi vs. whirpool?

Hot tub is officially an above-ground portable spa or a tub of hot water where people can soak or socialize. It's a self-contained system, with all of the plumbing and electrical systems built in to hold water at a set temperature.

Most of our customers will agree this can be used interchangeably with the word spa.

Jacuzzi: Just like Kleenex or Xerox, "Jacuzzi” is actually a brand name that is sometimes (incorrectly) used as a generic word for any hot tub.

The Jacuzzi brothers invented an underwater pump in 1956. It was originally used in bathtubs, with the goal to treat a family member's arthritis. It was then sold to hospitals and schools.

Whirlpool: Picture a bath or sink that is draining, and the swirling water as it begins to rotate toward the drain. That is a whirlpool. Spa jets can have a similar whirlpool effect.

(This is not to be confused with Whirlpool, which is also the name of a private company that makes home and kitchen appliances.)

Swim Spa: A swim spa is a like a hot tub (or spa), pool and aquatic fitness center in one. It’s bigger than a spa but smaller than a pool.

Swim spas were first brought to the market in 1980, and they have seen a surge in popularity in the last 5 years. When you don't want to choose between a pool or a spa (or hot tub), this is the perfect option.

Watson's carries one of the nation’s largest selections of hot tubs or spas from the top brands, including Hot Spring, Bullfrog, Fantasy Spas, Catalina Spas and more -- all at the guaranteed lowest price in the USA. (Availability may vary by location.)

Contact us now for a custom quote or for help finding the right spa (or hot tub!) for you, your home and your budget.